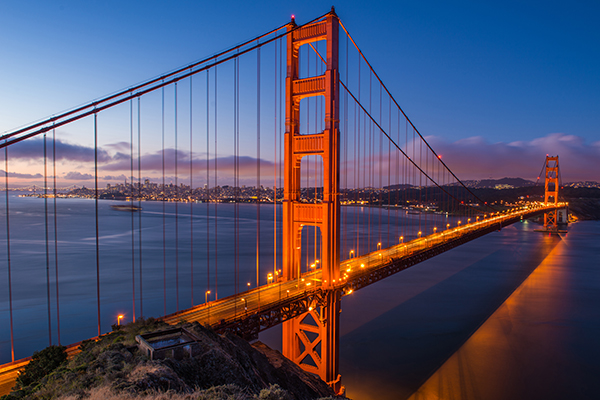 A foghorn blared into the California dawn at 6 a.m. on May 27, 1937, to signal the official opening of the Golden Gate Bridge. That day, nearly 200,000 people walked, ran, tap-danced and roller-skated across what was then the longest suspension bridge in the world. The next day, the Golden Gate Bridge opened to automobile traffic. As San Francisco’s signature landmark celebrates its anniversary, explore six surprising facts about this modern marvel of engineering.

The steel that arrived in San Francisco to build the Golden Gate Bridge was coated in a burnt red and orange shade of primer to protect it from corrosive elements. Consulting architect Irving Morrow found that he preferred the vivid hue of the primer to more conventional paint choices such as carbon black and steel gray. The “international orange” color was not only visible in the fog, but it complemented the natural topography of the surrounding hills and contrasted well with the cool blues of the bay and the sky. Morrow ultimately selected the bold primer color, intended to be temporary, to coat the bridge.