San Francisco famously boasts some of the steepest streets in the country. Whether you’re walking or driving, the varying gradient of the road is sure to catch your attention and give your heart rate a healthy boost. Lombard Street is one of the most unique of the vertically endowed roads and is a great stop to add to any itinerary. 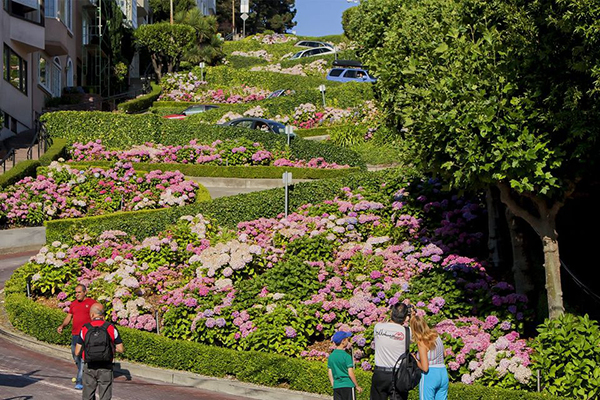 Lombard Street in San Francisco is one of America’s crookedest streets and found on many tours. The steep, hilly street was created with sharp curves to switchback down the one-way hill past beautiful Victorian mansions. If not for the byzantine curves, easing out this treacherous slope, people could be killed rolling down. For an idea of how steep this street really is, go two blocks up, to Filbert Street and peer down over the ridge. Lombard is even steeper.

Some of San Francisco’s most expensive real estate sits on Lombard Street. This Russian Hill neighborhood possesses stately mansions even with the endless array of tourists pouring down the street every day. In the spring and through the entire summer, Lombard Street is alive with color, as the many beautiful flowers are in bloom.

There are Famous Homes on Lombard Street, all just steps away form the crooked part of Lombard Street. You can’t go inside them but you can notice them from the outside as you’re walking around this area.

• The Real World House. On the Southern side of the street is the Real World San Francisco house (the home that the cast stayed in when the show was filming here). It’s at 949 Lombard Street between Jones and Leavenworth, just before you reach the bottom of the curvy part of the road if you’re walking up the hill.

• The Montandon House. Just slightly further up on the right, at 1000 Lombard Street, is the Montandon House, former home of 1960’s socialite Pat Montandon and reportedly one of the Bay Area’s haunted homes! Whether or not you believe in the stories of haunted houses, the history of the home is an interesting one because of the jet set lifestyle that Montandon lived there and the death that occurred that caused her to begin thinking the home was haunted (and ultimately causing her to move out).

• Scottie’s Apartment from Vertigo. Speaking of spooky homes, San Francisco scenery plays a prominent role in the famous Alfred Hitchcock film Vertigo. Scottie’s apartment is located at 900 Lombard Street, on the same side of the street as The Montandon House but a block down the hill at the corner of Jones and Lombard.

It may look treacherous but Lombard Street’s switchbacks were actually built to increase the safety of the street. The natural steep grade of Potrero Hill was thought to be too dangerous. In the 1920s a property owner suggested creating a series of switchbacks which not only added to the street's scenic appeal but made it safer for pedestrians.

The name Lombard actually has no link to San Francisco history. It is named after a street in Philadelphia.