From amazing views and a sea of sea lions to chowder bread bowls and California wines, your visit to San Francisco starts at PIER 39. PIER 39—the most visited destination in San Francisco—offers two levels of dining, entertainment, shopping and attractions, all surrounded by unbeatable views of the city and the bay. 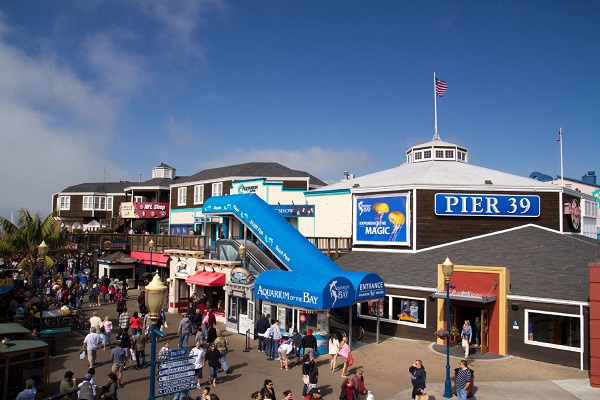 Pier 39 is a 45 acre (18 ha) complex located at the waterfront just a few blocks from famous Fisherman's Wharf. The views from the pier are wonderful and the area has been dubbed by the San Francisco Chronicle as the "Best Place to Watch People in San Francisco".

Most of the shops, eateries, and attractions at Pier 39 are open from 10 am until mid-evening on weekdays, with later hours on Friday and Saturday. It's one of the busiest areas of the city, so it's best reached via public transportation.

Pier 39 was originally built in 1905 as a cargo pier. Thanks to the vision of a few concerned citizens, the dilapidated pier was given new life in 1978, when it was renovated as a picturesque fishing village, and since that time has blended in with Fisherman's Wharf so that most tourists rarely recognize that they've left one and entered the other.

San Francisco Bay has always served as home for California sea lions, but it was not until 1989 that the sea lions began to make their way out to the docks on Pier 39. 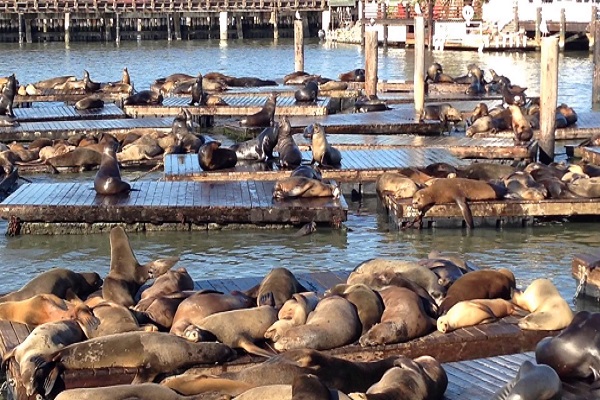 Prior to that time, they primarily used Seal Rock. Since 1989, the number of sea lions making their way to the docks at Pier 39 has been steadily increasing. It has been speculated that the Loma Prieta earthquake in 1989 may have influenced this shift in behavior. It is also thought that due to the removal of boats from the area as part of a renovation project, leaving large open spaces where the sea lions could navigate, could have influenced their move. Whatever the reason may be, the sea lions appear to feel right at home and today, visitors are frequently able to catch sight of hundreds of sea lions at a time. Some of them have even been dubbed with unofficial names.

The Sea Lion Center, operated and managed by Aquarium of the Bay, is a hub for all things sea lion, including interactive displays, educational videos and many fascinating presentations led by Aquarium of the Bay Naturalists. Touch a sea lion pelt, size yourself up next to a real sea lion skeleton and more. Once you get to know the California sea lions, step outside to the K-Dock overlook and see (and smell!) them for yourself.