While San Francisco may be better known for its private golf clubs such as U.S. Open venue Olympic Club or San Francisco and Lake Merced golf clubs, there are a few public gems in the immediate area and a wealth of daily fee courses in the metropolitan area.

Within San Francisco, the famous TPC at Harding Park, where the late Ken Venturi developed his game, is probably the best known. Renovated a few years ago, the course has played host to several high profile events recently, including the President's Cup and the Champions Tour's Schwab Cup.

But there are some less expensive options inside the city, such as The Presidio -- a former military course turned public, with terrific views of the Bay – Golden Gate Park and historic Sharp Park, a 1932 Alistair Mackenzie design. But because San Francisco is landlocked and quite congested, the vast majority of great public golf lies in the surrounding areas, from Oakland to the wine country north and south. For example, just across the Golden Gate Bridge, there's Bodega Harbor Golf Club, a Robert Trent Jones Jr. design overlooking the ocean.

About 45 minutes down the coast from San Francisco is the 36-hole Ritz-Carlton Half Moon Bay, which rivals Pebble Beach, when it comes to ocean views. Or head toward San Jose to check out the impeccable CordeValle Golf Club, the former home of the PGA Tour's Frys.com Open. Of course, if you're in San Francisco, it would be a shame not to carve out a couple of days to head south to the Monterey Peninsula, where you’ll find the famous Pebble Beach Golf Links, Spanish Bay and Spyglass Hill, just to name a few.

The California Golf Club of San Francisco (better known as "Cal Club") was founded in 1918 and was originally located in Ingleside, southwest of San Francisco on land leased from the Spring Valley Water Company. 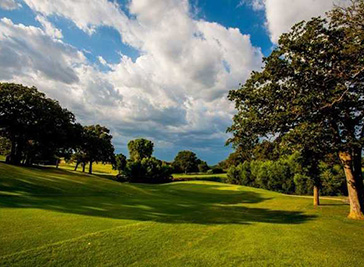 The West course is the featured golf course at Lincoln Park. At nearly 6600 yards from the black tournament tees, this par-71 course is one you don't want to miss. The par-5 #1 hole is a dogleg left that vaults you into this thoroughly gorgeous and challenging 18-hole masterpiece. Both of these courses are always maintained in tournament condition. 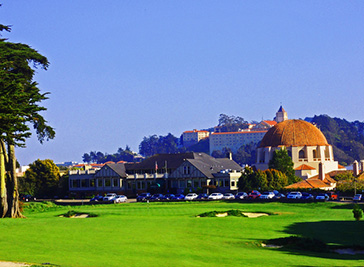